We all unconsciously reinforce our own cultural assumptions when interacting with the world. But with cultural awareness and a willingness to see beyond stereotypes, it is possible to become culturally competent. Cultural awareness means having a clear understanding of cultural identity and underlying biases. Cross-cultural competence is the ability to recognize when cultural differences are occurring in a group and use them to enrich a situation rather than detract from it.

Culture is formed by the characteristics, behaviors and knowledge of a specific group of people. It can include: symbols, language, values, norms, beliefs, socialization patterns, arts and food.

Watch a video about culture

Check your own biases

The Harvard Implicit Bias Test tests our implicit associations. Many of us do not consider ourselves racist, sexist, etc, yet we all have our own assumptions and biases – things we carry with us without even realizing.

These bias tests offer an interesting way to become aware of your own underlying assumptions and develop cultural awareness. You could test yourself on bias in any or all of the following areas:

Were you surprised by your results? According to the researchers, most people exhibit some moderate bias.. If the tests showed you had more bias than you expected, do not feel bad. Take this as an opportunity to build your own cultural awareness. Addressing your own position on culture is the beginning of intercultural understanding. Cultural awareness is the key. You can read more about culture and cultural differences in USAHello’s American culture section.

Cultural humility is a way of approaching others with a welcoming, interested, open and receptive frame of mind. Newcomers arrive with a host of past life experiences that are both difficult and confusing. They will be looking for clues as to how to behave in a new culture, while not yet understanding all of its new rules. As you practice cultural humility, you will be giving your newcomer neighbors the time and a safe space to make mistakes and to work through insecurities and fears. You will also allow yourself the time and space to learn from and be enriched by them.

Cross-cultural communication is a field of study that looks at how people from differing cultural backgrounds communicate, in similar and different ways among themselves, and how they endeavor to communicate across cultures.

There are two important things you can do to improve your cross-cultural communication. You can focus on non-verbal communication, and you can learn about differing communication styles among cultures.

Nonverbal communication includes all behavior that modifies, adds to, or substitutes for spoken or written language and is conveyed through the use of gestures, posture changes, and timing.

Differences can be based on:

Voice is a category that changes within cultures. Depending on whether or not the cultures are expressive or non-expressive, many variants of the voice can depict different reactions.

Make sure to pay attention to accents, tone, pitch, stress and speed. Also remember that the way you make jokes or express sarcasm or politeness vary across cultures. Sometimes, when a non-native English speaker does not understand us, we will speak louder. This does not help if you are speaking to a non-English speaker. When you speak loudly, you may make them uncomfortable. Instead, remember to speak slower.

Gestures vary widely across cultures in how they are used and what they mean. One example is sticking your tongue out. In Western countries, it can be seen as mockery, but in Polynesia it serves as a greeting and a sign of reverence.

Be mindful of your own expressions. Are you using any gestures that could be misunderstood or be offensive to the person you are communicating with? What gestures should you avoid?

Use of physical space and touch

The acceptable physical distance varies among cultures. How far away or close you can stand will depend of the culture of the person, their gender and the type of relationship you have. Try not to touch newcomers of another gender unless they offer first. Instead, you can make a small bow or nod. Generally, it is more acceptable to touch another person of the same sex as you.

Different cultures perceive the passage of time differently. Some cultures do many activities at once while others do one thing at a time. Also, being “on time” can mean different things to different people. In many countries, being on time means taking time to finish one thing before starting another rather than starting the next thing at a certain time. Please don’t be offended if you are meeting someone from another culture who is not “on time.” You can support them by helping them understand the importance of time in American culture, especially in the workforce.

Direct communicators mean what they say. On the other hand, indirect communicators (such as East Asian, SE Asian, Burmese, Cambodian, Laotian, Nepalese, Bhutanese, Korean) will often use props, body language and clues to nuance what they mean to say, but they will NEVER actually say it. They would rather be misunderstood than be forced to say what they mean because they want the listener to actually listen to the entire context of the conversation and they do not want to be seen as rude. It can be hard for Americans to work with indirect communicators because they will probably not tell you no in a direct way.

For example, you may ask someone to attend an event and they may nod, so you assume they are now coming. In reality they never intended to come and they do not show up. Your feelings may be hurt because you may have done a lot of work to plan an event or host an event.

Here are some tips to help you with direct/indirect communication:

What is cultural competence? And why is it important? 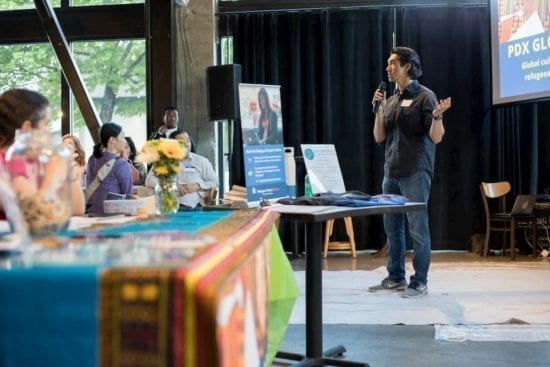 How to be a mentor to newcomers