Do you want to understand the questions on the N400 form? It is important to know what the words mean when you fill out the form and when you go for your citizenship interview.

Do you need help filling out your application? There are many good resources to help you. Learn how to fill out the N-400 form.

Questions about the N-400 in your citizenship interview

Why will I be asked what a question means?

There are two reasons. First, USCIS wants to make sure you understood the question well enough to answer it correctly. The second reason is to test your English skills. It is much harder to explain something than to say “yes” or “no.” If you can explain what something means in English, it shows that your English skills are good.

Which questions will the USCIS officer ask me to explain?

The USCIS officers usually ask people to explain a word or phrase in Section 12. Here is an example: one question in Section 12 asks, “Have you ever been convicted of a crime or offense?” If you answered “no” on your form, the interviewer may ask you, “What is a crime?” or “What does convicted mean?” You will want to explain in English that a crime is an action that can be punished by law. You can say that convicted means found guilty in a court of law.

Difficult words on the N-400 form

At the top of the form

The N-400 form comes with official instructions. You can view or download the N-400 instructions as a pdf. The instructions do not explain all the words, but they do explain some of the terms in the form, such as “Asian” or “Alaska Native”.

Videos that explain the vocabulary in the N-400 Part 12

These videos are the best resource to help you understand the vocabulary (words used) in Part 12 of the N-400 questions. The videos are in English, but you can use the “cc” button and then “settings” to see captions in your language.

There are some good websites that will help you understand the words on the form:

Immi.org has a glossary for immigrants

Immi has a glossary (list of terms) for immigration topics. Use the glossary to find a definition or explanation for words you do not understand. You can search for a term or click on the letter your word begins with.

This dictionary was made for people learning English. It is easy to use and explains words in simple terms.

Google Translate changes English words and sentences into your language

Type or paste any word or even long texts into Google Translate and select the language you want. It works better for some languages than others. For example, it is good at Spanish but not very good at Arabic.

The information on this page comes from USCIS and other trusted sources. It is intended for guidance and is updated as often as possible. USAHello does not give legal advice, nor are any of our materials intended to be taken as legal advice. If you are looking for a free or low-cost lawyer or legal help, we can help you find free and low-cost legal services. 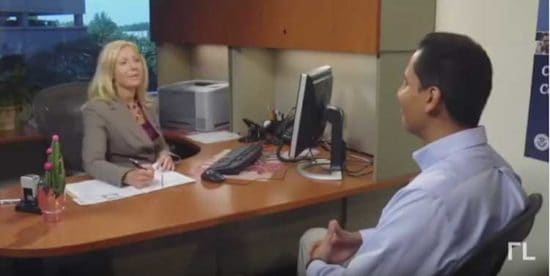 What citizenship test questions could I be asked in 2022?

How to fill out the N-400 naturalization application form

How to apply for U.S. citizenship