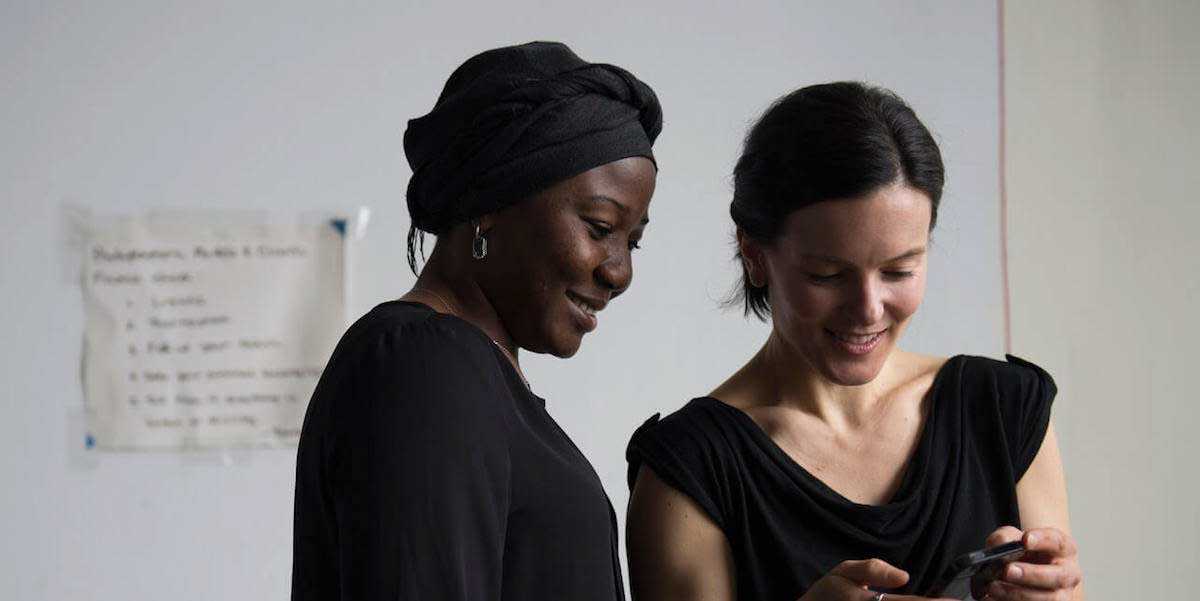 Americans come from many cultural backgrounds. Different cultures, traditions, and customs have shaped the United States.

Here are some general American cultures that can be different from other countries. It is helpful to understand these differences to adjust to life in the USA. It can also help you avoid misunderstandings. Not everyone follows all of these cultures and you can still honor your own culture.

Direct and straight-to-the-point communication are common. It is not considered rude. It is a way of interacting with people that tries to deliver a message quickly.

In other countries, maintaining eye contact could be a sign of disrespect. In the USA, making eye contact shows respect and interest in the other person and what they are saying.

Learn more about how people communicate in the USA.

Personal space is important for Americans. The preferred distance is typically around 18 inches for people you know and 4 feet for strangers. Some people could become uncomfortable or upset when there is not enough distance.

Both men and women typically shake hands with each other when meeting someone new. It is also common to greet someone you know well with a hug. Americans show affection in public. People generally prefer not to touch those they do not know well or in the workplace.

It is ok for a person to decline to shake hands or touch them because of religious or cultural reasons. The COVID-19 pandemic has also made some people uncomfortable with greeting others with physical contact.

It is considered polite to eat with your mouth closed and to avoid licking your fingers or burping. Americans mostly eat with silverware (fork, knife, and spoon) but use their hands for food like sandwiches. Everyone typically has their own plate and bowl for each meal. If you are unsure if food is communal or for one person, you can ask.

It is not acceptable to pick your noses or teeth in public.

Find ten tips on having good manners in the USA.

Being politically correct is trying to communicate and use words that do not offend anyone. It is common for Americans to choose their words carefully when talking or writing about certain topics and groups of people.

It is important to respect people and show sensitivity. This includes taking the time to listen and learn, especially with those who have been marginalized or have less privilege.

The American family has been traditionally considered a nuclear family. This type of family includes a couple and children that do not live with extended family.

Single parents, divorced couples, and other types of structures have modified what most understand as family.

Learn more about family roles in the USA.

Men and women got to work and school together while also sharing many responsibilities. This is one of the biggest cultural differences and adjustments for some newcomers.

Everyone is expected to help with household chores. Many men help with cooking, cleaning, and taking care of children. Women usually work outside the home like men and it is common to use childcare. Boys and girls go to school together. More women are enrolled in university than men.

Women and girls are still expected to go to work and school while they are menstruating. When a woman has a baby, she may receive time off from her employer. Sometimes this is paid leave and sometimes it is unpaid. It is common to return to work shortly after having a baby.

Elders do not get the same level of respect as they do in many other countries. Business leaders, social media influencers, and the rich tend to get more respect in the USA. Elders are often called seniors.

It is not common for elders to live with their children and grandchildren. They usually live on their own or in assisted living residences or nursing homes. This may be a hard adjustment for older immigrants. It can cause loneliness and be more expensive.

Learn how to find a senior center and resources for older people.

In the United States, marriage between people of the same sex or gender is legal. Same-sex couples have rights including being able to apply for a partner in another country to come to the USA.

People can only be married to one person. Polygamy is against the law. Divorce is also common and accepted.

Many Americans visit the doctor for yearly check-ups rather than just when they are sick. They also regularly see a dentist for teeth cleanings.

Laws protect patients’ privacy. Doctors and nurses will not discuss a family member’s medical conditions. To share that type of information, you’ll need to get permission.

Mental health is important to Americans. It is common for people to see a counselor or therapist when they are feeling really depressed, sad, or angry. Seeking help is accepted and encouraged.

All school-age children must go to school. Schools expect parents to get involved in their children’s education. This means:

Children are expected to actively participate in class and think critically. Critical thinking includes questioning ideas. Your child might start to question you and things outside of school. In general, this is not considered disrespectful in the USA.

Learn more about your child attending school in the USA.

Americans take pride in their jobs and are competitive. Work is taken very seriously. People work weekends, nights, and holidays if it is required.

Some workers sacrifice their family time to work extra hours and be able to provide for their families. Younger people today in the United States are starting to change the culture of work and prioritize personal time more.

Many jobs in the United States provide benefits for their workers, like health insurance, dental plans, paid holidays, medical leave, and retirement plans. Ask your employer about their benefit plan when you start a new job.

Learn more about finding work in the USA.

Americans place a lot of value on their time. This is one of the cultural differences that many newcomers struggle with. Americans often follow a schedule for daily events and work. They make appointments for meeting with others and it is important to be there at the time decided upon.

Time is especially important at school and work. Being late to work or school can get you in trouble.

The U.S. capitalist economy means that people, and not the government, own businesses and services.

Many Americans use credit to buy things, such as with credit cards and loans.

Americans do not usually share their money with their extended family, although it is not unusual for them to help each other out. They do donate a lot of money to charities. Many churches and organizations provide food and other needs to families who do not have a lot of money.

After receiving certain services, it is common and almost expected that you will give a tip. A tip is a small amount of money you give a person to show appreciation and thank them for their service. It is also known as gratuity.

Restaurant waiters, hairdressers, taxi drivers, and others receive tips from customers. Many workers in the service industry make minimum wage and depend on tips to support their families.

There is freedom of religion in the United States and many different religions are practiced. People are also free to not participate in any religion at all. Government and religion must be kept separate from each other by law.

It is important to be respectful of other people’s beliefs and faith. Most religions maintain the same values of respect and kindness towards one another.

If you are a practicing Muslim, you can talk to your employer about your faith and ask for a place to pray during the day. Many schools will also provide a space for students to pray.

There are different types of holidays observed in the United States. Federal holidays are followed by government institutions, banks, and the majority of companies and businesses.

Religious holidays like Easter and Christmas are celebrated by many people, even by those who do not practice the religion. The Fourth of July and Thanksgiving are holidays unique to the USA.

Most Americans have three names: first, middle, and last name. The last name is the family name or surname. Many women take their husband’s last name when they get married, although some keep their own last name or use both.

You can ask for help when you don’t know how to pronounce a name. You can also politely correct someone if they are not pronouncing your name correctly.

Some people within the LGBTQ+ community choose to go by different names or pronouns, such as using “they.” It is important to respect these requests.

There is no official language in the U.S. but the majority of people speak English. Many people in America also speak a second language at home. Spanish is the most popular language after English.

If you do not speak English, learning it can help you get a job and feel more comfortable in the USA. You can take free English classes online.

Important laws in the U.S. you should know Child and parenting laws in the U.S.